As the Finance Minister of India , Mr. Arun Jaitley, got up to deliver the Union Budget for the Financial Year 2017-2018, every Business Man in the country was waiting  for the Tax Reforms. The Direct Tax Reforms given in the budget dated 1st Feb’2017 will be applicable in the F.Y. 2017-18 or A.Y 2018-19.  Some crucial and evident changes have been made by the Government for the Small and Medium Scale Business in the budget.

We have decoded the key changes proposed in the Union Budget announced by the Finance Minister on February 1, 2017. 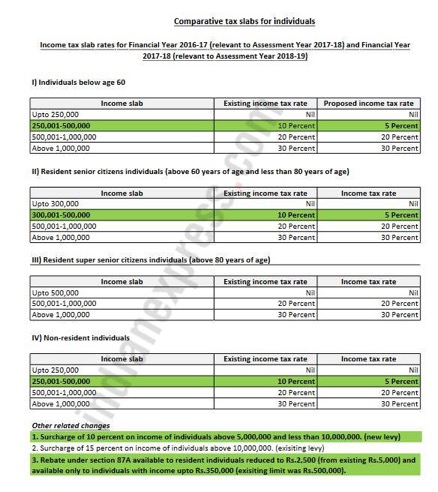 The existing provision of section 10(12A) of the Act provides that payment from National Pension System (“NPS”) trust to an employee on closure of his account or opting out shall be exempt up to 40% of total amount payable to him. In order to provide relief to an employee who is a subscriber of NPS, it is proposed to provide exemption for partial withdrawal not exceeding 25% of the contribution made by an employee in accordance with the terms and conditions specified under Pension Fund Regulatory and Development Authority Act, 2013 and regulations made thereunder.

As per the existing provision of the Act, withholding tax obligation on rent payments arises only in case of individuals or HUF who are liable to tax audit.  It is proposed that individual or HUF not liable for tax audit will now be required to withhold tax at the rate of 5%, if the rent exceeds Rs 50,000 per month or part of month on payment of rent.

Also Tax deduction and collection Account Number (“TAN”) will not be required to be obtained.
Further, tax would be required to be withheld only once during the previous year in the last installment payable for the year.

In addition to the above, it is proposed that under section 206AA of the Act, maximum deduction shall not exceed the rent payable for the last month of the previous year/ last month of tenancy.

Further, for the purpose of computing indexed cost of acquisition, 2001 shall be considered as the base year.

It is proposed to amend section 2(42A) of the Act to reduce the holding period from existing 36 months to 24 months in case of immovable property being land and building or both to quality as long term capital asset.

It is proposed to provide exemption under section 54EC of the Act on investment of long term capital gains in any bond redeemable after three years that shall be notified by the central government. This will be in addition to investments in NHAI bonds and RECL bonds where exemption was allowed on investment up to Rs 5,000,000.

In order to promote digital transactions and to encourage small unorganized business to accept digital payments, it is proposed to amend section 44AD of the Act to reduce the existing rate of deemed total income of 8% to 6% in respect of turnover or gross receipts received by an account payee cheque or account payee bank draft or use of electronic clearing system through a bank account during the previous year or before the due date specified in sub-section (1) of section 139 in respect of that previous year. However, the existing rate of deemed profit of 8% referred to in section 44AD of the Act, shall continue to apply in respect of total turnover or gross receipts received in any other mode.

Most important Income tax changes which will occur from 1st April

FRRO and Taxation Services for Expats in India

Drop Us a Line